Just LOOK at that scenery! Colorado is gorgeous, and end of May was the perfect time to go visit, do some hiking, and check out a concert at Red Rocks, and I feel like we didn't even scratch the surface! There are places like Breckenridge, Crested Butte, Vail, Telluride, and various Hot Springs, that we are saving for next time. Major takeaways for me on this trip:

- The weather in Colorado is kind of crazy. Storms come out of nowhere, last a little bit, then move on- and the temperature changes pretty significantly. We were constantly layering and delayering and layering again the entire trip. The nights are cool no matter what - so pack accordingly.

-Altitude is not something to play with. We did some pretty crazy hikes that took us up a couple thousand feet in elevation, and you can really feel the difference. It's harder to breathe and you have to pee a lot. We spent a couple nights in Colorado before we tackled hikes to get acclimated, I think that plus staying super hydrated all the time was really key to not getting sick.

-You need a car on this trip, Colorado does not have much public transit options.

-There is an entrance fee you have to pay to get into Rocky Mountain National Park ($20/person). Go early, the entrance is set up like toll booths and the lines get longer as the days go on. You can then park your car at several park and ride lots and there are shuttles that take you to various trailheads in the park.

May 26: Flew out that night direct from Philly into Denver. After several delays we finally arrived, however it was already 10pm, so we grabbed dinner at the airport, got our rental car, and drove to our Hampton Inn hotel (2728 Zuni Street, Denver). The hotel was about 2mi outside of Denver city center.

May 27: I'm a sucker for Hampton Inn's because free breakfast! It's never that good, but it does the job. So after breakfast we walked about 40mins from the hotel into downtown Denver. The weather was meh, so we checked out around the stadiums, the capital building (which was filled with homeless people), basically walked the majority of the downtown, then rented city bikes and biked to a lunch spot. The minute we walked out of lunch it started to pour, so we decided it was time to chase the sun and head to Estes Park. After our 2 mile walk back to the hotel in the downpour, we drove an hour and a half (no traffic) to our place in Estes Park. We rented a place on Tripadvisor called "The Bunkhouse at Old Man Mountain". It was adorable- perfect for 2 people. The place is family owned and the brother lives on the property in a separate house. The house has 3 separate private apartments. Ours had a full kitchenette, queen sized bed, separate living area with couch and TV, small deck off the back with access to a shared patio with grill, and shared laundry in the front. It was a 20min walk right into the heart of Estes Park, a 10min drive to some hikes in Estes Park, and a half hour drive to RMNP trails. On our walks into the town we saw Elk just hanging out on the side of the road every time. When we first arrived, we bought food at the grocery store (5min drive) for breakfasts and snacks. One big way to save money on trips- don't go out for breakfast - cook at your place. Then, once we settled in we walked down to Estes Park town, hit up happy hour at this cute outdoor beer garden, and went to an Italian place for dinner. Estes Park is really cute, it has a riverwalk where all the restaurants are- and has a lot of "boardwalk" stores as well. I don't know how else to describe these stores, but they are like the ones you find on the boardwalk on east coast beaches, they had stores selling Colorado or Estes Park or Rocky Mountain t-shirts, souveneirs, and a ton of dessert shops selling taffy/cookies/ice cream/popcorn, etc. So cute. Not really any fine dining, the restaurants there were all geared towards families so nothing crazy, pretty basic, relatively priced.

May 28: One cool thing that the Bunkhouse provided us with was a guestbook, where previous guests had written suggestions, hikes they had done, things to see, etc. A few people had mentioned getting breakfast at "Cinnamons" which was literally right across the street from us. Right when they opened Joe went down and got in line - yes - there was already a line. They only sell Cinnabons so if that's not your thing don't go there. Joe got us 3, they were huge and delicious and it took us the next few days to finish them. After Cinnamons Cinnabons we drove a half hour to RMNP. It had snowed 2+ feet just a week prior to our trip, so there was still snow on the ground and some of the roads were still closed. But the trails we went on didn't have a ton of snow, where they did it was packed down pretty good, and we were layered up and wore hiking boots, so we came prepared for our day of hiking. We parked at the first park and ride and took the shuttle up to the Bear Lake trailhead. From there, we hiked around Bear Lake, down to Glacier Gorge and Alberta Falls, Sprague Lake, Bierstatd Lake, and made our way all the way back to our car. These were all amazing hikes - the lakes were beautiful with the snow capped mountains in the background, and really only the beginning of our hikes had a good amount of snow on them - as we headed back it became less and less. After we made our way back to the car we headed back to the bunkhouse, cleaned up, then walked into town for quick drinks and tour of the Stanley hotel, happy hour at the Wheel Bar (if you like large dive bars, highly suggest this one) followed by dinner at Claire's. 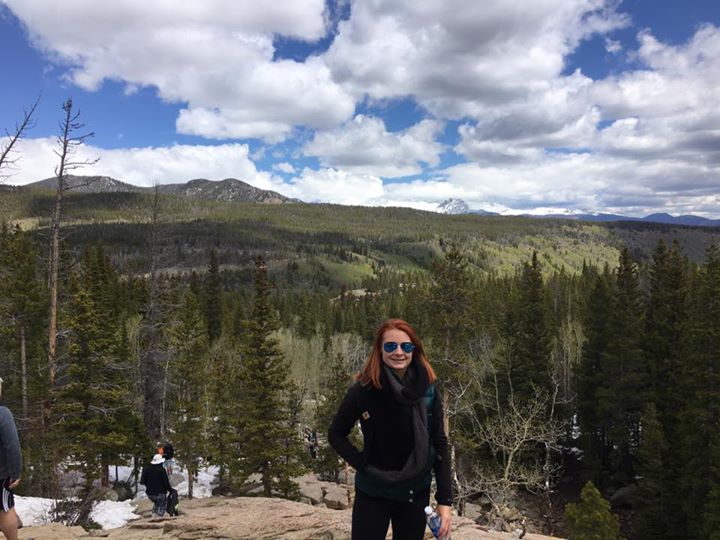 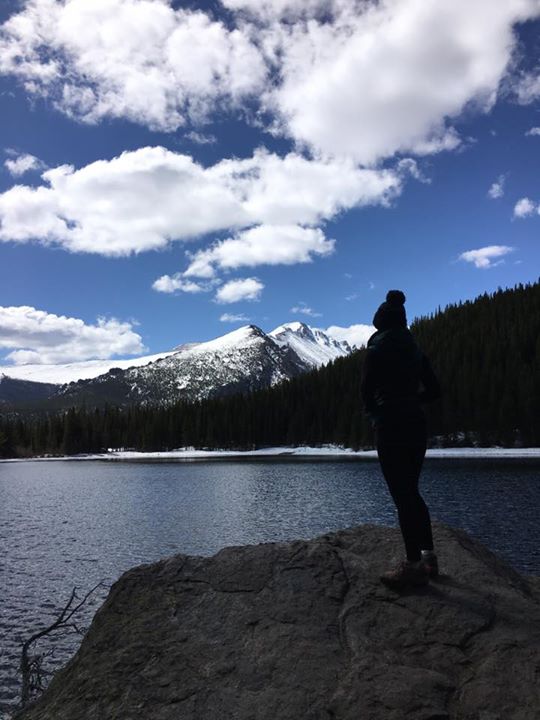 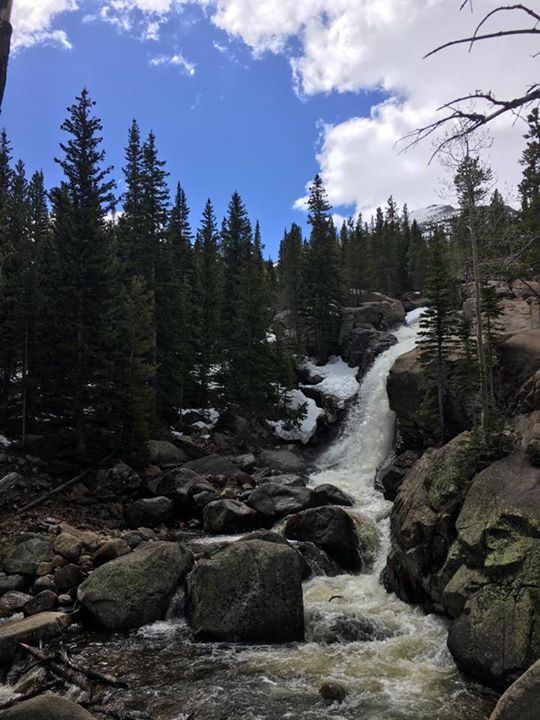 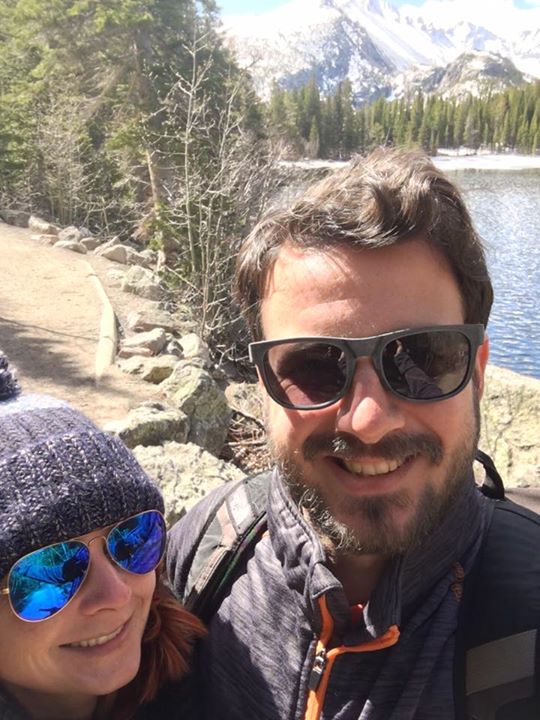 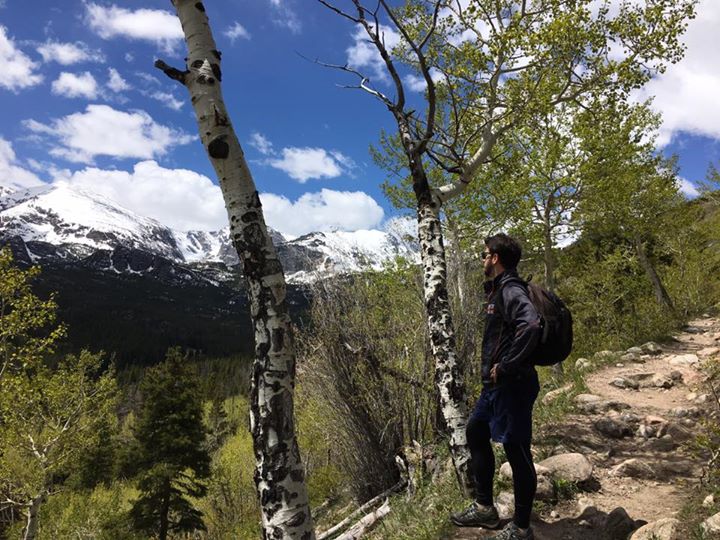 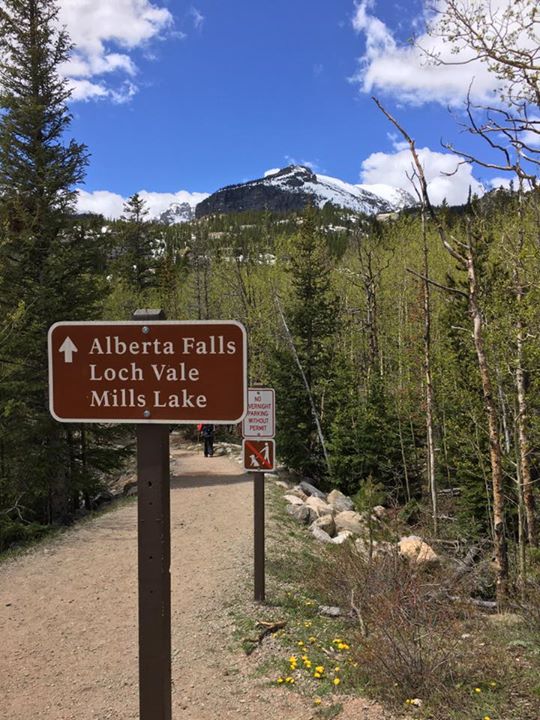 May 29: Another day, another hike! This day, we tackled one right in our backyard. Just a 6min drive to the Lumpy Ridge trailhead, and we started hiking straight up. No snow on these trails, but more amazing views. We hiked to Gem Lake, around and back- probably a good 3hrs. A thunderstorm was coming just as we were able to finish up. That killed the morning, we headed back to clean up, then drove an hour to Boulder to check it out, walk around, and have some brunch. I'd love to go back, stay in Boulder for a night or 2, and do hikes in Colorado Springs and El Dorado Springs which are close by. After day tripping to Boulder, we came back to Estes, and ordered a take out pizza from Anthony's (a little closer to the bunkhouse than going all the way into town). Pretty decent pizza for the midwest! 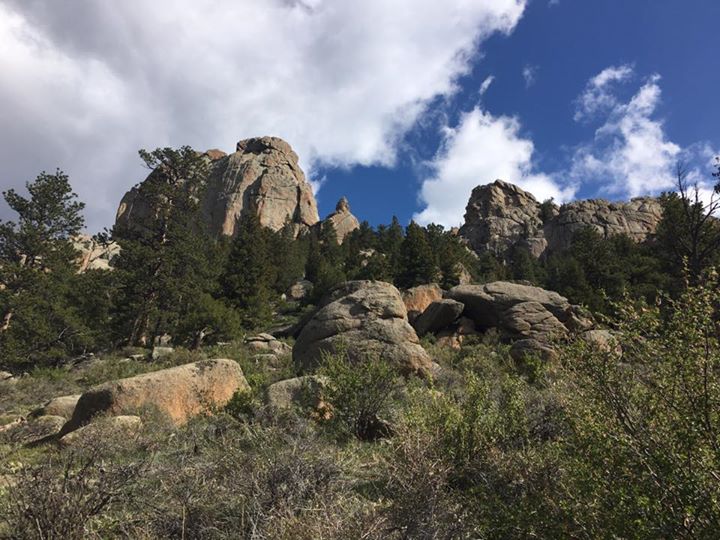 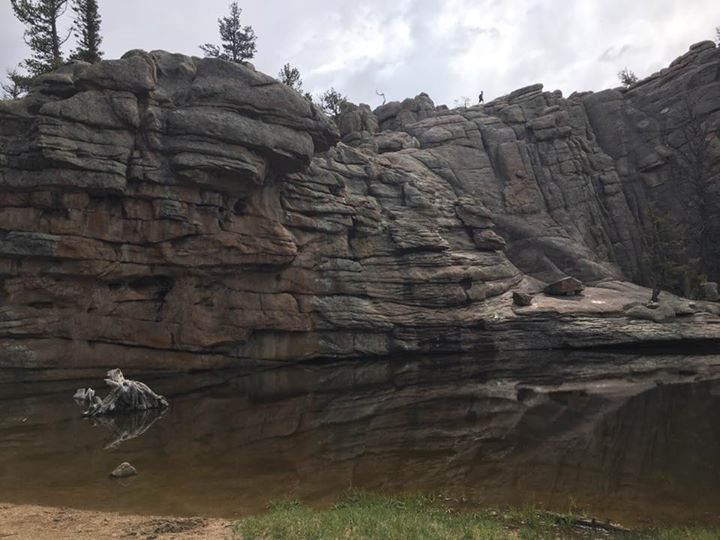 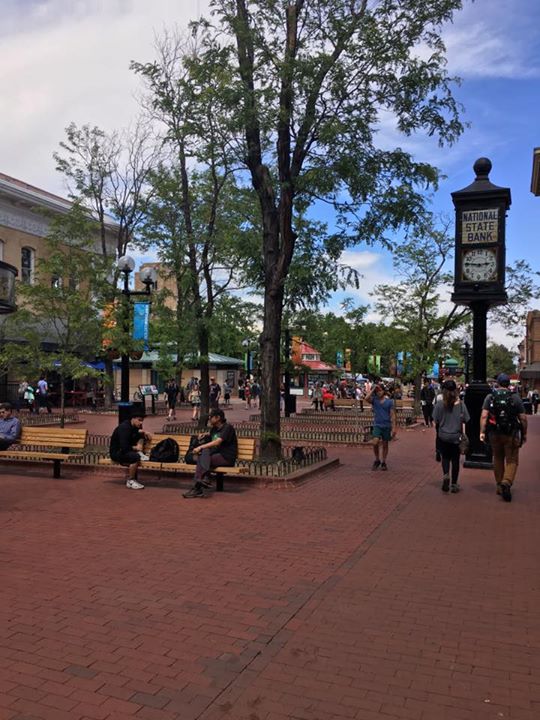 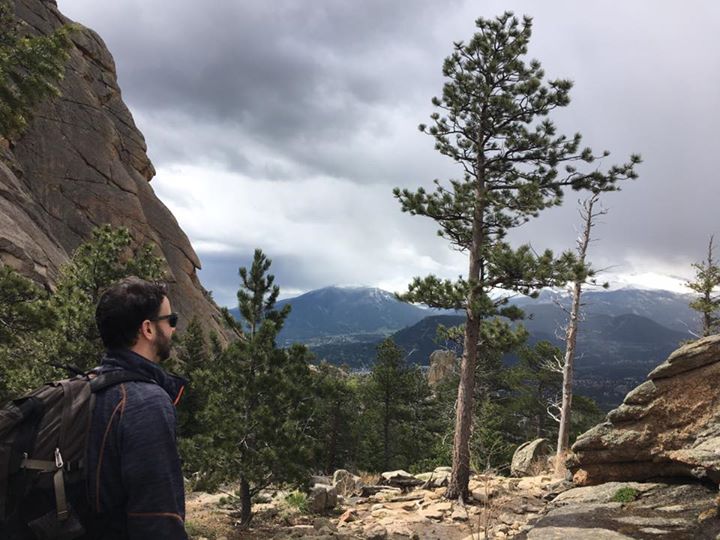 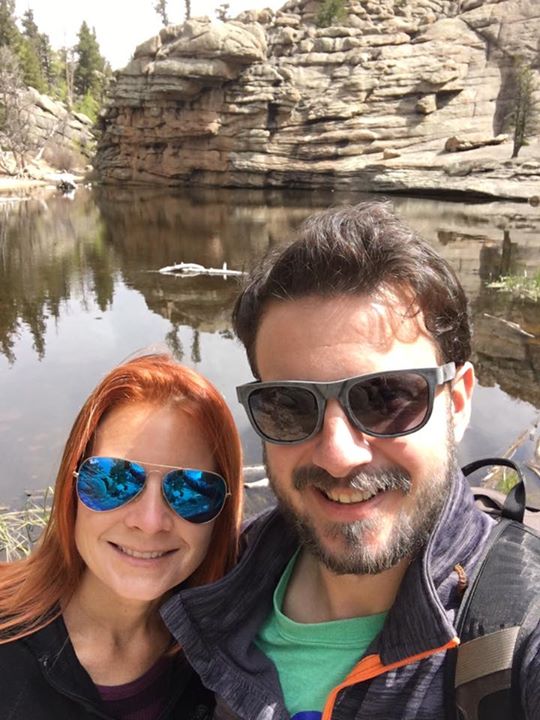 May 30: Started out with a 4 mile run around Lake Estes. Flat, easy, and it was actually hot out! Then we drove down to Golden, CO (about a 1 hr 30min drive) and checked into yet another Hampton Inn, 6 miles away from Red Rocks Ampitheater. We wanted to get one last hike in, so we drove to the Red Rocks Trail and did that for a couple of hours. The landscape was so much different than RMNP! Hard to believe it's the same state! Afterwards, we drove to "downtown" Golden (such a small little town, but I was impressed with the foodie restaurant scene going on) and had dinner at Abejas which had pricey, awesome food and a really good wine/beer/cocktail selection. Then we drove back to the hotel, we had called a cab earlier in the day to pick us up and take us to Red Rocks to see Tom Petty. The cab never showed up, so luckily UberX came through, navigated us away from all the crazy traffic, and got us to Red Rocks in like 20mins. Both rides from UberX (we took one on the way home) were only like $15-20, which I thought was great - no surge pricing even with the concert! Pro Tip- don't stay for finale songs at Red Rocks, call your Uber right when the main set ends, and then walk all the way down past the taxis to meet them. We were back to the hotel in 15mins. Red Rocks is such a cool venue. Not only are the acoustics great, but there is no lawn seating, you can see the Denver skyline, they actually have a good food/booze/beer/wine selection, and you are watching a concert in a venue carved out of rocks- it's surreal. A few people that have been to many concerts there told me that the weather is always bad though, and actually half way through the concert Tom Petty had to stop playing for 15mins because of a thunderstorm. We were all put underneath the ampitheater where the bathrooms were, but it actually was a good time for a bathroom break and 15mins later the concert continued and the rain had passed, and the show went on. 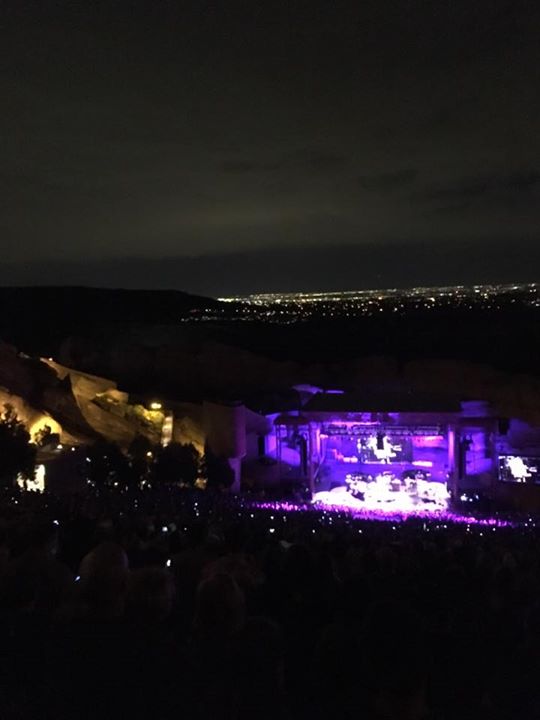 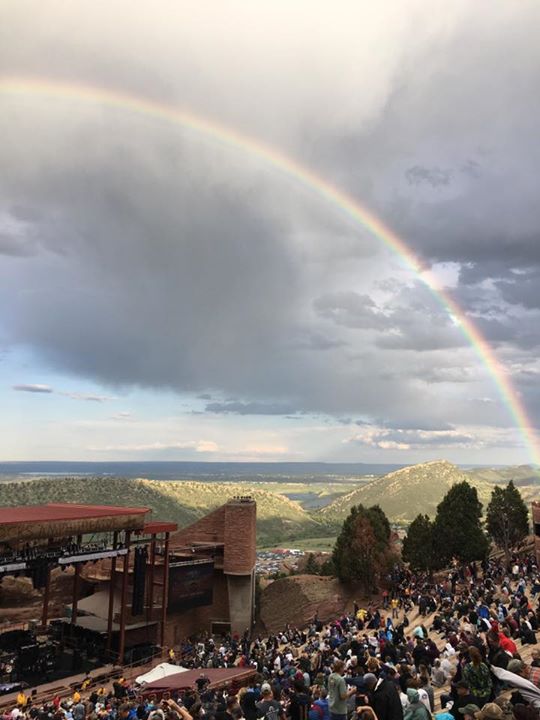 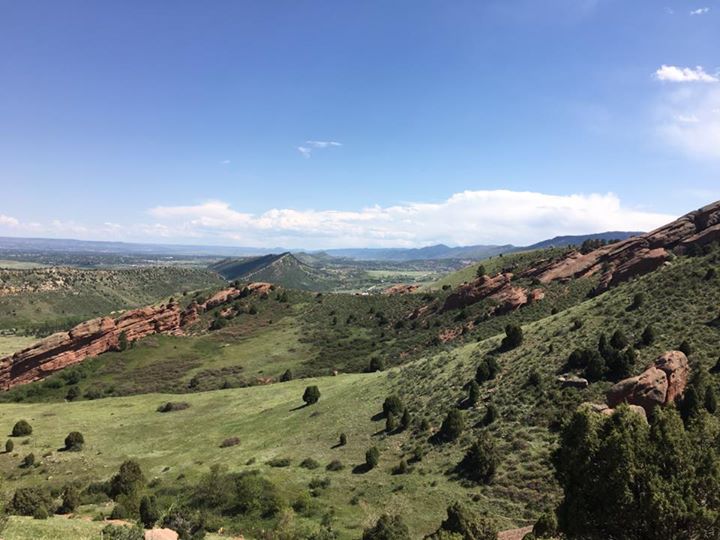 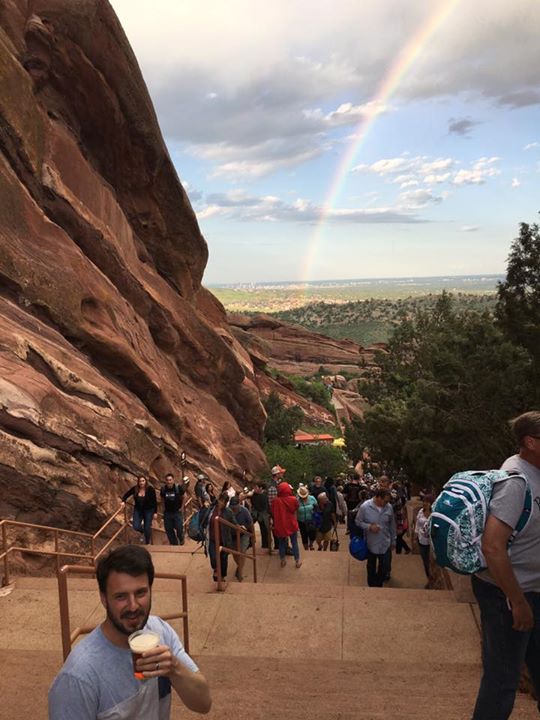 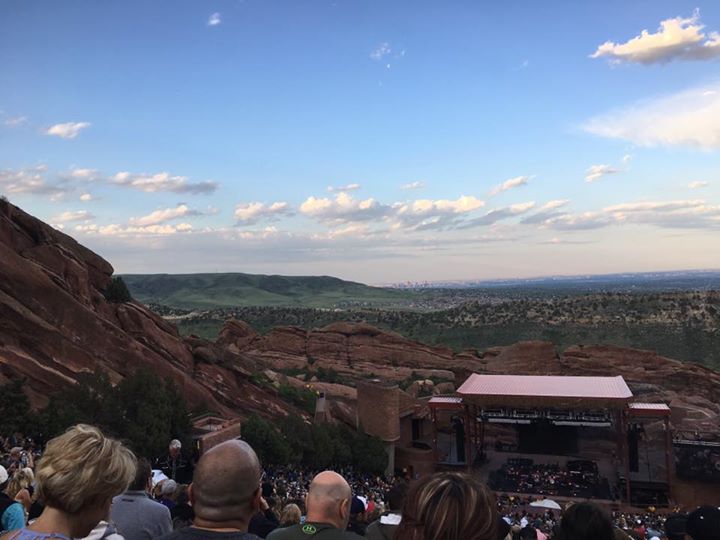 May 31: I hate when trips end. And this was for sure a TRIP, nonstop, hiking and running and sightseeing.

From Golden it was a little less than an hour drive to the Denver airport, and we had no problems dropping off our rental car and catching the shuttle to the airport.

What an amazing trip- makes me want to move to Colorado.

Cost breakdown for 2 of us(excluding airfare and concert tickets):

Hampton Inn Denver CO: free on points but around $150/per if paid